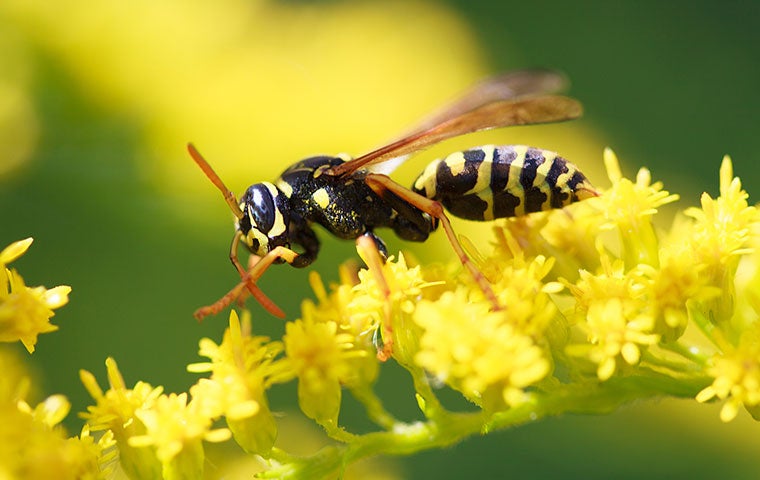 Stinging insects build their nests in walls, attics, and eaves of homes, and in shrubs, trees, and even in the ground. It takes very little disturbance to initiate an attack response! Simple things, like walking by or opening a door, can trigger these aggressive pests, and it’s hard to avoid when they invade our space to build nests.

When one member of the colony is harmed or threatened (by being batted at or stepped on, for example), it releases an “alarm pheromone” that quickly results in aggressive, defensive behavior from other members of the colony. It quickly turns into a full-on war of the wasps! These insects rapidly scale up into attack mode (they literally fly out of the nest in droves to defend) and can sting multiple times. If you didn’t know, their stings contain a nerve toxin that may result in hospitalization, so be very careful.

Because of their aggressive nature, it’s not a good idea for homeowners to try to treat these insects by themselves. Instead, learn how to identify these aggressive pests, and call the experts to take care of business.

There are several species of wasps in Florida, including Yellow Jackets, Paper Wasps, Cicada Killers, and Mud Daubers, to name a few.

Paper Wasps are usually yellow with brown markings, or black with red or yellow markings. Their nests are also made of paper-like materials that queens build and colonies live in. The nests, shaped like an upside-down umbrella, are often found under eaves of houses or on shrub branches, so be very cautious while removing them from eaves or trimming shrubs. A nest usually has a single comb with up to 250 wasps.

Mud Daubers are black with long, thin bodies. This wasp is a little different than its relatives — it’s not social or very aggressive and rarely stings people. However, it usually builds nests of mud close to human activity. Their nests are typically found on the sides of buildings or under eaves. Mud daubers sting and paralyze spiders. Once paralyzed, the mud daubers lay an egg on the spider, and seal it in their nest chambers. Once their larva hatch, they feed on the spider. When you see a hole in the mud, it means the wasp has come out of its chamber— yikes.

Hornets & Yellow Jackets – Is There a Difference?

Hornets are actually Yellow Jackets. The term “hornet” is used for species with above-ground nests. No matter where they live, all yellow jacket and hornet species are social and live in colonies of hundreds to thousands of individuals. For anyone trying to get rid of these pests, knowing the difference between these species can be tricky.

Are There Yellow Jackets In Florida?

Unfortunately, yes, in Florida you’ll encounter the Eastern Yellow Jacket, the Southern Yellow Jacket, and the Bald-Faced Hornet (which is actually just a yellow jacket too). You can spot a yellow jacket by the yellow and black markings on their bellies — not to be confused with bees (bees are friends). Yellow jacket stingers are not barbed, meaning they can sting repeatedly. Their nests, or should we say mansions, are made of a paper-like material and can be large enough to house thousands of wasps.

Do Yellow Jackets Live In The Ground?

How To Identify Yellow Jackets

You can spot a yellow jacket by the yellow and black markings on their bellies — not to be confused with bees (bees are friends). Yellow jacket stingers are not barbed, meaning they can sting repeatedly. Their nests are made of a paper-like material and can be large enough to house thousands of wasps.

Do Hornets Live In The Ground?

While the Yellow Jacket species prefer to live underground, Bald Faced Hornets, on the other hand, live in aerial nests, which can be up to a foot or more in diameter.

How To Identify Hornets

Hornets can be very large, over 2 inches in length! In general, hornets only become aggressive when approached near their nests. They tend to be more docile than wasps, but when upset, their stings can be very dangerous. Hornets typically have white and black markings, unlike wasps which have yellow and black markings.

How To Get Rid Of Yellow Jackets, Wasps, & Hornets

Due to their aggressive nature, and the potential to cause a medical emergency for anyone who is stung, we do not suggest tackling a wasp issue yourself. It’s not a good idea for homeowners or business owners to try to treat these insects by themselves. Instead, it is best to learn how to identify these aggressive pests and call the home pest control experts to take care of business.

Our home pest control and commercial pest control experts in Jacksonville will work with you to exterminate these stinging insects.