Are Wolf Spiders In Jacksonville Dangerous? 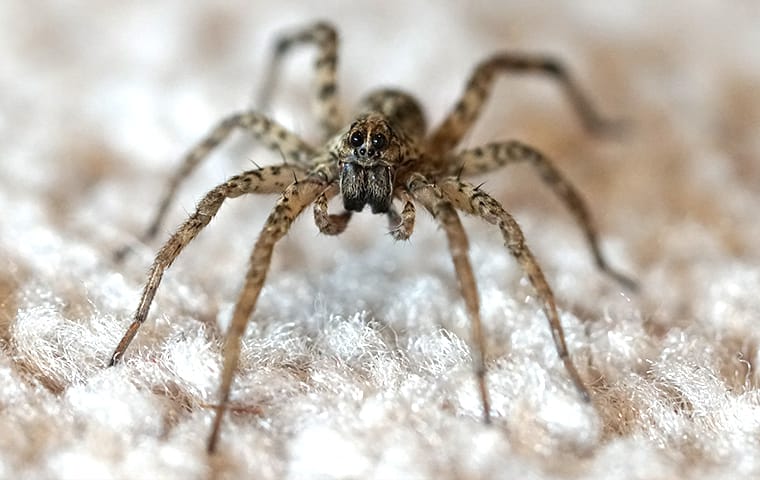 Finding any spider in your Jacksonville home can be upsetting, especially if you have a fear of these arachnids. But, while some species like the spindly cellar spider don’t look all that dangerous, others can be terrifying. The wolf spider in Jacksonville is one of the scariest-looking species in the area, and this guide is here to help you understand these spiders and how to prevent them.

Wolf spiders are rather stout and robust-looking house spiders. They are a mix of brown, grey, and black patterns, and they are usually around an inch to an inch and a half long.

They have large hairy legs, and this allows them to run quickly to catch their prey. Unlike most other spiders, they don’t build webs and wait for prey to get caught in them. Some wolf spiders don’t make webs at all but instead are mostly found on the ground hiding under organic debris. Others build webs where they wait for prey to come close and then go on the chase.

A wolf spider’s running behavior often makes people think they are being chased, but this is highly unlikely. Spiders will generally try to avoid people. Even if they are running toward you, they are most likely trying to get away.

To cut right to the chase, the truth is that wolf spiders aren’t dangerous. They do have fangs and venom, just like all spiders, as this is how they take down their prey. However, wolf spiders don’t have strong enough venom to pose risks to people or pets. Although they may give painful bites, these spiders would much rather avoid humans, and their bites are unlikely to lead to any health side effects.

However, just because they aren’t dangerous doesn’t mean these spiders aren’t a terrifying sight, and they aren’t welcome guests in the home.

Do Wolf Spiders Get Indoors?

Generally, wolf spiders prefer to live outdoors. They are found in wood and rock piles or under things like leaf litter and dead trees. However, they will get inside if they are hunting down their prey. Unlike some other pests, they don’t seek the indoors for shelter from the weather, but they will in pursuit of a meal.

This is why underlying pest problems are the most significant factor that attracts wolf spiders inside your home. When they do get indoors, wolf spiders are usually found in dark areas that aren’t often disturbed and can sometimes be seen running along baseboards.

Since wolf spiders are drawn to properties that have insect pest problems, the easiest way to prevent these spiders is through general pest control services. The experts at Trad’s Pest Control have experience dealing with all kinds of pests and the spiders they attract in Jacksonville.

We offer residential pest control plans that will prevent and remove any underlying pest control problems and also address wolf spiders. If you’ve seen wolf spiders around your property, there are likely more pests that you’re not seeing. It’s simple and easy to give us a call to learn more about spider control options. Contact us today to request a quote or book an appointment.